All Aboard the Trump Train 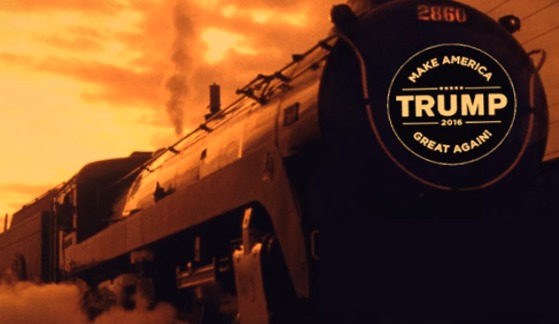 I’m on the “Trump Train” and I’ll tell you why.

When Trump announced his candidacy I was skeptical.  I saw him as an ego-driven celebrity trying to promote himself.  But, as time went on it has become apparent that he truly cares about America.

The other GOP candidates, with the exception of Ben Carson, are the same old “establishment” politicians who capitulate to Democrats and betray their own voters.

Ever since George H.W. Bush reneged on his “no new taxes” promise, and started pushing his “new world order” instead of promoting a stronger America, I began to lose faith in the GOP establishment.  In 1994 when the GOP took Congress, I thought there was hope, but then they ended up capitulating to the Dems, and practically handed the 1996 race to Clinton.

George W. Bush started off OK, but once the GOP got the Senate back in 2002, every conservative plank of the platform was suddenly off the table.  Bush let Frank and Dodd run the economy into the ground and the GOP took the blame.  Thus, an unqualified, ineligible America-hater became president.

Trump is being attacked by both the Left and the GOP Establishment.  This tells me he’s the right man for the job.  And what is the job?  It’s to restore America, rather than absorbing it into some globalist satellite state, but to make America a strong sovereign and free nation.

This could be America’s last chance.  If there were someone other than Trump who was promoting the “make America great again” message, and had a real chance to win, I’d support that person.  But as it stands, Trump is the only hope – not for the GOP, but for the USA.

Establishment career politicians like Paul Ryan, Mitch McConnell, etc., who have spent their careers paving the way for the liberal agenda, need to stop their traitorous attacks on Trump and get behind him, that is IF they care about this country more than their own careers.

Think about it: which is worse, a republican supporting Trump, or a republican who says they’d rather have Hillary?  It is unfathomable to me that anyone with sense would choose Hillary over a fence post, let alone over a successful businessman who loves his country.

Put aside your “Party” and put your country first.  Don’t buy the media’s spin.  Don’t listen to their criticism of what Trump says; look at what Trump says for yourself.  He has been ripped to shreds over things he never said and never meant.  He is being accused of inciting violence when it’s his opponents who are doing that.

Go back to the first axiom of politics 101: If the media are saying it, the opposite is probably true.  TRUMP 2016!