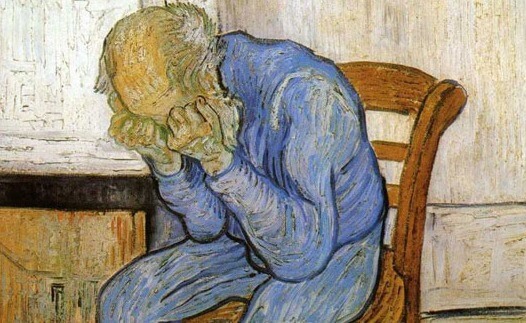 Old Man with Head in His Hands by Vincent Van Gogh

In college fifty years ago my psychology professor told us that there were more people in insane asylums due to religion than any other cause. She explained that what drove these people insane seemed to have been the presence of two powerful and conflicting thoughts within their minds; two opposing thoughts that were so powerful and inescapable that they were incapable of either reconciling the differences or of choosing one and discarding the other. The mental stress that resulted from fighting this mental battle, after a period of time caused their minds to retreat to a safe place where they would not have to make a choice.

I have witnessed the manifestation of this theory more than once during my military career; situations where fanatic religious training clashed with reality and caused a person’s conscience to run amuck. The best example of this was a young Muslim man (a boy really) who worked for me in Iran as my plane captain. He had been raised in a strict eighteenth century Muslim culture and then, too suddenly and without preparation, exposed to me, other Americans, our lifestyle, and the activities of a modern Western society. While I was in Iran, I met several young Muslim men, like my plane captain, who found out that they liked to drink, dance, and chase available American and French women and go to American movies; some of these men were tormented by the fact that they really enjoyed these activities. While they believed that they were good Muslims they were convinced that if they were really good Muslims they would not actually enjoy doing what they were doing; therefore, they were tormented by the thought that (because they enjoyed these activities) they obviously could not be good Muslims. My young plane captain ran amuck one Friday evening, after attending his mosque, to the point that he joined a civil terrorist group and burned down a theater that was showing an American film; they burned this theater after barring all the exit doors with all the women and children trapped inside. He believed that this horrific act exonerated him from his past sins against Allah.

To live and function successfully in a society one needs a conscience; however, to survive, you need to exercise control over your conscience. A conscience that is driven out of control by any form of fanatical training will only lead to a ruined life. I am sorry for Muslims because there is no help available for them; Muslims are trapped, they are chained to Islam and will be killed if they leave Islam or even question Islam’s ways. Islamic religious leaders refuse to make the necessary updates and changes to keep pace with modern society because they know any change in Islam will cause them to lose the power the system gives them over the people.