A Democrat Tried to Smear a Black Conservative, He was Stunned by Her Response 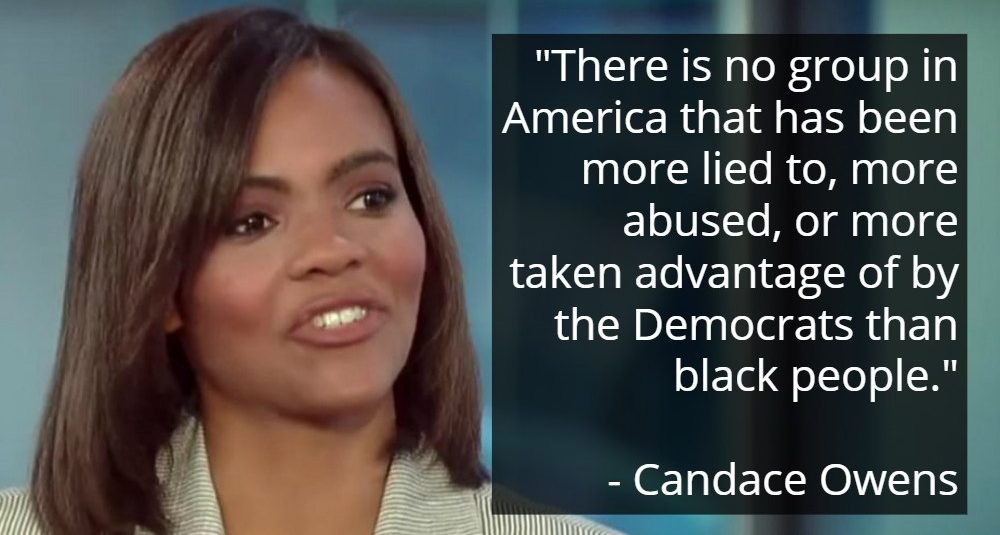 To call Rep. Ted Lieu (D-CA) one of the most ignorant members of Congress would be too kind.

He proved his ignorance earlier this week when he attempted to smear Candace Owens as a Nazi sympathizer, not realizing that she would defend herself.

Lieu attempted to smear Owens by playing a short soundbite of comments she made at an event this past year. Edited out of the clip was the question that prompted Owens’ response. When she was asked about “nationalism” being evil, Owens responded that Hitler shouldn’t be labeled as a nationalist because he was actually a psychopath who murdered his own people. (Which is hardly a nationalistic thing to do.) Instead, Lieu only played a portion that appeared to be a sympathetic comment about Hitler.

Lieu didn’t give Owens a chance to reply.

That is how you respond to Democrat slandering tactics.

Call them out by name and then use their tactics against them.

Owens blasted Lieu as a racist who must believe ‘black people are stupid.’

We need more people speaking out against Democrats in the manner that Candace Owens does.

This wasn’t her only opportunity to shine at this hearing – she also attacked the Chairman, Jerry Nadler (D-NY) for his apparent anti-black bias.

“My biography, which I submitted, you reduced it to one sentence, calling me just a conservative activist and it wasn’t what I said or what I submitted to your office last night. I just think that you opened with anti-black bias and I see it coming from the chairman today,” Owens told Nadler.

Here are Owens’ opening remarks wherein she absolutely torches the Democrat Party and reminds Americans about our real history.

Mr. Chairman, Ranking Member Mr. Collins thank you for having me here today. I received word on my way in that many of the journalist were confused as to why I was invited and none of them knew that I am myself was a victim of a hate crime when I was in high school. That is something that very few people know about me because the media and the journalists on the left are not interested in telling the truth about me because I don’t fit the stereotype of what they like to see in black people. I am a Democrat. I support the President of the United States and I advocate for things that are actually affecting the black community.

I am honored to be here today in front of you all because the person sitting behind me is my 75-year-old grandfather. I have always considered myself to be my grandfather’s child and I mean to say that my sense of humor, my passion and my work ethic all comes from the man that is sitting behind me.

My grandfather grew up on a sharecropping farm in the segregated South. He grew up in an America where words like racism and white nationalism held real meaning under the Democratic Party’s Jim Crow laws. My grandfather’s first job was given to him at the age of five years old and his job was to lay tobacco out to dry in an addict in the South. My grandfather has picked cotton and he has also had experiences with the Democrat terrorist organization of that time, the Ku Klux Klan. They would regularly visit his home and they would shoot bullets into it. They had an issue with his father, my great-grandfather.

During my formative years I have the privilege of growing up in my grandfather’s home. It is going to shock the committee but not once, not in a single breath of a conversation did my grandfather and tell me that I could not do something because of my skin color. Not once did my grandfather hold a gripe against the white man. I was simply never taught to view myself as a victim because of my heritage. I–I learned about faith in God, family and hard work. Those were the only lessons of my childhood.

There isn’t a single adult today that in good conscience would make the argument that America is a more racist, more white nationalist society than it was when my grandfather was growing up and yet we are hearing these terms center around today because what they want to say is that brown people need to be scared which seems to be the narrative that we hear every four years right ahead of a presidential election.

Here are some things we never hear. 75 percent of the black boys in California don’t meet state reading standards. In inner cities like Baltimore within five high schools and one middle school not a single student was found to be proficient in math or reading in 2016. The singlehood–these single motherhood rate in the black community which is at 23 percent in the 1960s when my grandfather was coming out is at a staggering 74 percent today. I am guessing there will be no committee hearings about that. There are more black babies born–there are more black babies aborted than born alive in cities like New York and you have Democrat governor Andrew Cuomo lighting of buildings to celebrate late-term abortions. I could go on and on. My point is that white nationalist–white nationalism does not do any of those things that I just brought up. Democrat policies did. Let me be clear the hearing today is not about white nationalism or hate crimes, it is about fear mongering, power and control. It is a preview of a Democrat 20/20 election strategy the same as the Democrat 2016 election strategy. They blame Facebook. They blame Google. They blame Twitter. Really, they blame the birth of social media which has disrupted their monopoly on mines. They called this hearing because they believe that if it wasn’t for social media voices like mine would never exist, then my movement Blexit which is inspiring lack of Americans to lead–to leave the Democrat party would have never come about and they certainly believe that Donald Trump would not be in office today.

Looking on the next thing to focus on now that the Russian collusion hoax has fallen apart. What they won’t tell you Bell this statistics and the rise of white nationalism is that they have simply change the data set points by widening the definition of hate crimes and upping the number of reporting agencies that are able to report on them. What I mean to say is that they are manipulating statistics.

The goal here is to scare Blacks, Hispanics, gays and Muslims into helping them censor dissenting opinions ultimately to helping them regain control of our countries narrative which they feel that they lost. They feel that President Donald Trump should not have beat Hillary. If they actually were concerned about white nationalism, they would be holding hearings on Antifa a far left violent white gang to determine one day in Philadelphia in August that I come a black woman was not fit to sit in a restaurant. They chased me out, they yield race traitor to a group of black and Hispanic police officers who formed a line to protect me from their ongoing assaults. They threw water at me. They threw eggs that me and the leftist media remain silent on it.

If they were serious about the rise of hate crimes they may (INAUDIBLE) examining themselves and the hate they have drummed up in this country. Bottom line is that white supremacy, racism, national–white nationalism, words that once held real meaning have now become nothing more than election strategies every four years the black communities offered handouts in fear, handouts and fear. Reparations and white nationalism. This is the Democrat preview. Of course society is not perfectible. We have heard testimony of that today. There are pockets of evil that exist in those things are horrible and they should be condemned. But I believe the legacy of the ancestry of black Americans is being insulted every single day. I will not pretend to be a victim in this country. I know that that makes many country on the left uncomfortable. I want to talk about real issues in black America theater want to talk about real issues in this country, real concerns.

The biggest scandal–this is my last sentence–in American politics is that Democrats have been conning minorities into the belief that we are perpetual victims all but ensuring our failure. Racial division and class warfare are central to the Democrat party platform. They need Blacks to hate whites, the rich to hate the poor. Soon enough it will be the tall hating the short.