A Common Language is Handy When Learning how to Skydive 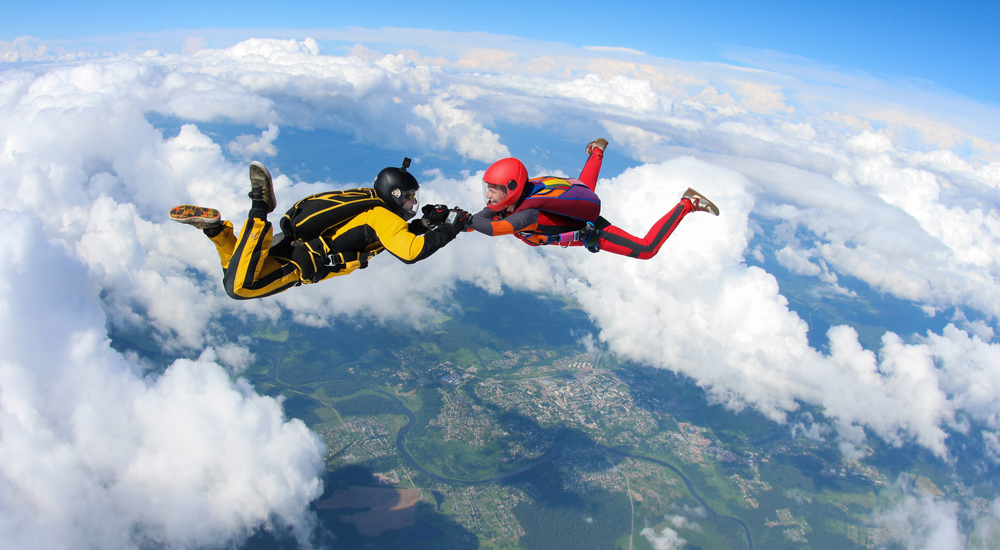 Say you and your family decide to take a vacation. But instead of the normal touristy destinations, you place your brain in a box and go to Russia, or Pakistan or some other place that isn’t Americanized, or at least not necessarily accommodating of Americans.

You arrive, and right of the bat you realize this is a mistake. You know where you need to get to, but no one speaks English and none of the signage is recognizable.

Then, as luck would have it, something happens – some sort of disaster – an Earthquake or something. And there you are with your family in tow all looking at you for guidance. People are running hither and yon. Police are yelling out instructions, but you can’t understand a word. Pardon the vernacular, but you’re pretty much screwed.

Now imagine something very similar here in the United States.

One day you decide that you would like to go skydiving. Maybe it’s one of those bucket list items. You’ve imagined how much fun it might be. So you go to the nearest jump school and attempt to sign up. But there’s a problem.

All the instructions and signage are in English only. And did I forget to mention that you can only speak and read Spanish, or German or Russian, etc.? That, as one can imagine, will be a big problem and even bigger safety concern. Your plan is to jump out of an airplane without understanding a word of instruction during ground school. And if something goes wrong while you’re up there, and your instructor, who is strapped to your back, can’t communicate with you, the result is likely that you’re both dead.

In other words, you have to be an idiot to attend a skydiving school if you don’t speak or read the same language as the instructors. And the school would have to be equally stupid to allow it.

Most would agree unless you are a leftist who thinks that every business, at least in Texas, should cater to the strictly Spanish speaking and that there is something nefarious and of course racist if a business doesn’t.

The Dallas Skydive Lodge recently found this out, as an Irving Texas resident, Angelica Escobedo, shared a screenshot of the Skydiving school’s requirements.

But as is usual when leftists are involved, the liberal media highlighted and concentrated on only one paragraph.

It reads: “If you are in this country illegally, please go home and sky-dive in your own country. We don’t want any money you obtained in the USA illegally.”

Oh the horror of a private business being allowed to make their own rules.

What most of the press who reported on this neglected to add, is that that paragraph is only one of six. The others are things like you must be 18 or older, have a proper picture I.D. and that “you must be able to read/write/speak fluent English…”

And why? It’s because they just hate Mexicans – right? No, that’s not the reason. The reason, as they further explain is, “so you can understand and fill out legal paperwork and we can communicate.”

They also insist you not be a fatty-fat-fatso. “You must weigh 220 pounds or less. Yes, we weigh you.” Is this also discriminating against the corpulent? Yes – yes it, because it must be, for safety reasons.

The owner of the Dallas Skydive Lodge, Hank Schraeder explained that, “the requirement for reading and speaking English is for safety when providing sky diving instructions.”

He also added that, “There is no racial profiling on my website or anyplace else. This has nothing to do with what country you came from or what race you are. I don’t care if you came from the Netherlands, if you’re here illegally then you should go home.”

But to ignorant leftists, this fell on deaf ears as they took to social media to condemn Hank and his school. One reviewer wrote: “If I could give zero stars I would. Please don’t give your money to racists.”

And I agree with the reviewer. If you feel that strongly, by all means, don’t patronize Hank’s facility. It’s called the marketplace at work. As long as the government doesn’t involve itself in this matter, Hank can display anything he likes and let the chips fall where they may. And I for one am glad he didn’t cave to these liberal weenies.

In closing, I thought I would check with my son who recently did his first tandem jump. I asked him what the odds of him having a successful jump if everything said and written was in Russian. He confirmed what I already knew. He said it would’ve been zero percent.