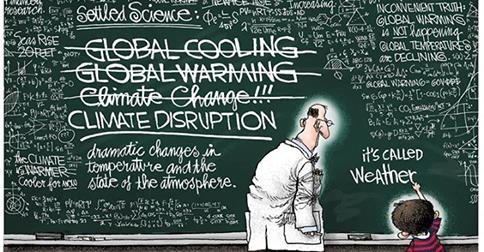 Obama and the Liberals have claimed for years that 97% of scientists believe in the fake science of “Climate Change.” It turns out that is just another big lie, as recent surveys prove. In fact, over 30,000 scientists, 1/3 of them Ph.D.’s, have signed a document declaring that they DON’T buy in to “Climate Change. In fact, they say it’s a hoax!

“Climate Change” is a huge, profitable business. Al Gore has gotten rich from this junk science industry. In fact, his personal net worth has grown 500% since he became the spokesman for climate change.

American’s have such short memories. Many of the same scientists who are on the climate change bandwagon today used to call it “Global Cooling” in the 1970’s. A new ice Age was upon us, and mankind would be eradicated by freezing to death. Unfortunately for their credibility, we’re still alive and have not turned into Popsickles. Interestingly, several thousand articles about “Global Cooling” were mysteriously erased from Wikipedia and other sites in the past few years.

When “Global Cooling” was debunked they switched the name to “Global Warming.” The polar ice caps were going to melt, the oceans would rise, and we would all drown. We didn’t drown. And the same historical revisionism was brought into play again. Articles about “Global Warming” were deleted. And many scientists who corrected the record on Wikipedia found their changes deleted over and over again.

The attempts to alter history and erase all links to the thousands of articles and records of the hundreds of “Global Cooling” and “Global Warming” conferences is very well documented here: http://notrickszone.com/…/massive-cover-up-exposed-285-pa…/…

Temperatures don’t always rise, as they claimed in “Global Warming.” Nor do they always fall (“Global Cooling”). Tired of defending the indefensible, they changed the name to “Climate Change.” That was safe – because the climate is always changing!

The problem for the Liberal climate change fanatics is that – according to an eminent scientist” – the reason the climate regularly changes is because of solar flares. Retired senior NASA atmospheric scientist John L. Casey has revealed that solar cycles are largely responsible for warming periods on Earth – not human activity.

So what’s next? Some of the climate weirdos want to change the name of this fake “emergency” to “Climate Disruption.” But the main reason the Liberal Left is so intent on blaming humanity for changes in the climate is that they hate petroleum energy. So some have proposed calling any change in climate – whether warming or cooling – “Carbon Pollution.” Al Gore, who has become a laughingstock for his many false predictions, reportedly likes this name because it conjures up a picture of a huge black cloud of carbon hanging over the earth.

Real science has documented that the climate has changed in both directions since the beginning of time. So it is obviously not human activity that has caused it – unless someone can explain how the cooking fires of ancient nomadic tribes could cause massive shifts in the earth’s climate.

Scientists as far back as Benjamin Franklin have documented the massive effect of volcanoes of our planet’s climate. In fact, one group of scientists found that the eruption of just one volcano – Mount St. Helens in 1980, which spewed ash over 11 states – had far more impact on our climate than ALL human activity that year. And there are hundreds of volcanic eruptions every year.

Whether the real cause of the regular shifts between cooler and warmer weather is caused by solar flares, volcanoes, or other natural phenomena, one thing is certain. The puny human race has next to no impact on climate when compared to the massive power of the sun or multiple volcanic eruptions.

It would be nice if all the climate freaks spent their time doing something useful – like discouraging their fellow Leftists from rioting, burning, looting and attacking innocent bystanders and police officers every time they don’t approve of a new law, a presidential order, or the way a court ruled.