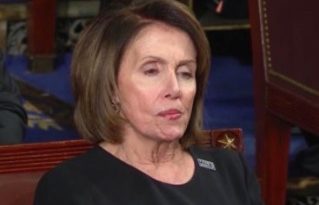 Observations after listening to the State of the Union address and before colored through listening to or reading commentary by other pundits.

Before a single word was spoken, cameras began recording and continued to record a picture of two Americas: one of a smiling, happy audience in glorious technicolor and the other of dour, scowling unhappy black-clad people who could have been filmed in only black and white. Never an eloquent speaker with soaring rhetoric, Trump spoke to the American people like a loving grandfather, using simple words to explain a complex subject to small children. “Americans can dream too!” While I might wish he would use additional adjectives, rather than simply repeating “terrible” again and again, I found this state of the union the most interesting one heard since those of Bill Clinton. An added bonus, I did not get dizzy from watching his head turn from side to side as I did with Obama.

Cheerleaders are an integral part of team sports. Their job is to rev up both players and crowd to do their best, encourage team spirit, and show enthusiastic support. Last night I observed our president acting as cheerleader-in-chief to “Team America,” a role in which he excelled.

As Trump told story after story of ordinary citizens in extraordinary circumstances, it was a living testimony to Americans at their best: patriotic, compassionate, generous, dedicated, fearless, and caring. I wiped tears from my eyes, again and again, as I saw how humble and appreciative guests seemed when their stories were told. The stony-faced audience on one side of the aisle earned my contempt when cameras showed them remaining seated and unmoved. Did they view the baby adopted by an Arizona policeman and his wife from its addict mother as some piece of tissue that should have been aborted? Were the parents of the Long Island teens killed by MS13 gang members to be pitied less than lawless illegals? Would the boy who started a movement to put flags on veterans’ graves have been more admired had he convinced himself and several of his classmates to petition for transgender surgery? What actions might they have found tears for?

There were a few cringe worthy moments. When I heard Trump state the mathematically challengeable figure of $2,000 as the value of the average family income tax return next year, and $4,000 as the average family income increase, I immediately said aloud, “Oh no!” Since I know more than 50 percent of Americans pay less than that or even nothing in federal income tax, the statement is a statistical impossibility……sort of like Obama’s $2,500 health care insurance premium savings.

As I listened to Trump’s words and observed audience reaction, I could not help but wonder if the same script, but delivered by Chuck Schumer would have received the same treatment. Are some members of Congress rendered deaf and mute because of hatred for this man and their lost election? While listening to a list of economic achievements, I remember learning a rising tide lifts all ships, so everyone will benefit, not just the wealthy, as the political left repeatedly emphasize. I heard this speech as inclusive, not divisive….wishing peace, security and prosperity for all walks of life, all races, ages and genders. That apparently is not what the Black Caucus heard because inexplicably, they remained seated and sullen when the president said unemployment among blacks was at an all time low.

One phrase reminded me of Obama’s State of the Union address in which he said, “We will reward our friends and punish our enemies.” Trump echoed this when after noting several UN nations censored the US for stating the obvious in recognizing Jerusalem as the capital of Israel, he said, “That is why, tonight, I am asking the Congress to pass legislation to help ensure American foreign-assistance dollars always serve American interests, and only go to America’s friends.” Upon hearing these words, I immediately wondered why we are still paying salaries to unhappy members of Congress who resist, block, undermine, subvert and bad-mouth every single proposal from the Republican side of the aisle. Are they America’s friends?

Finally symbolism of the two Americas I initially observed was displayed again by clothing worn by Melania and Ivanka Trump in contrast to that of Nancy Pelosi. Melania was in white, symbolic of a blank canvass, hope, brightness and light, akin to raiment portrayed in angelic garb. Ivanka wore a multicolor, geometric patterned dress which could be interpreted as symbolizing the many shapes and races of all Americans. Then there was the pale-faced, black clad Nancy, grimacing throughout and sitting like a bird of prey, waiting for the carrion body of America to be totally destroyed through words and actions of a man and ideology she despises.

When I read others’ observations and opinions, I am sure some may focus on topics not addressed, simply because I personally could find little to disagree with in the speech and so rather than embarrass themselves by appearing anti-American, they will focus their displeasure on what was not there rather than what was. As always, perception becomes your reality and my perception was this was an uplifting inspirational testament to what America can and will become again…..for all Americans if and when they put aside petty differences and agree to agree more of the time.