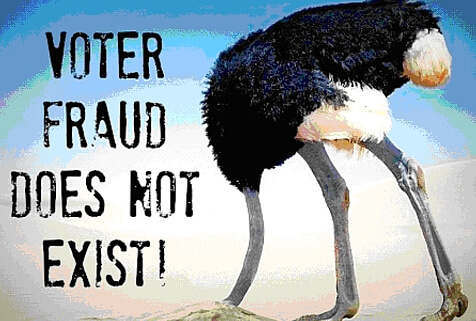 Politics is America’s favorite game.  It is not always played fairly.

Rumors are swirling that voter fraud may have been present in the last two special elections. (Roy Moore vs Doug Jones and Rick Saccone vs Conor Lamb)

All voters are encouraged to use their cellphones to record votes, and to record and report any departures from an ideal voting experience.

(From a Programmer’s Perspective)

There is little doubt that computers can tally votes faster and more efficiently than doing so the old-fashioned way. However, computers also have a dangerous liability. They can be doctored more easily to falsify the results and only the programmers who have access to the software will be able to tell.

Here are some suggestions on how to guard against such fraud.

When a voter casts a vote, two receipts should be printed – one is deposited into a sealed bin for manual audit purposes and the other one is for the voter. Both receipts carry the same serial number and show which candidate was voted for.

While each serial number is unique, the numbers are issued in a scrambled order, rather than sequentially. This is to preserve voter privacy – for example, if Bill is right behind Joe in the voting line, Bill won’t be able to figure out Joe’s serial number and who he voted for.

After the voting station closes, a list is published online, which bears the name of the voting station and shows all the serial numbers issued in numerical order with the candidate voted for. That way anyone who voted can look up their serial number and verify that their vote was correctly recorded. The list should be issued as a spreadsheet and presented in a way that makes it easy to tally the total number of votes cast for each candidate. The list should also contain a hotline phone number and email address to report any perceived irregularities.

Each voting station issues such a list, each with its own unique identification code. A list representing all voting stations and showing each station’s results when available is also published online for anyone with Internet access to inspect. All of these lists are downloadable, but stored on secure sites to prevent interference from hackers.

For security reasons, the computer at the voting station is isolated from the Internet until after the station closes, at which time it connects briefly to upload the list to a secure server and, after verifying that the server has the correct data, automatically shuts down. The computer equipment and the sealed bin with the voting tickets are then immediately taken to a pre-arranged official secure receiving location.

The voting computers are manufactured by reputable companies, to exact hardware and software specifications (published online for anyone to inspect) and certified by reputable auditing companies to meet the specs and work perfectly. They are then sealed, with the seal to be broken only when the station opens. In the voting station, the only way to access the computer is via the buttons for selecting the candidates. The person in charge at the voting station unseals the unit and follows a check list to ensure everything works properly and then signs off on it.

The above should help ensure that all votes are accounted for and correct, thus taking care of that technical issue. However, there is another issue, which is to ensure that each voter is qualified to vote (US citizen, of voting age, registered, not a felon, etc.) and votes only once. That is a human issue and subject to political vagaries. It is difficult to make the system tamper-proof without possibly preventing some minorities from casting a vote to which they are entitled.

The following scenario is workable. Each person qualified to vote receives a personal printed invitation to vote. The person takes this invitation and a photo ID to a voting station and presents this to a voting official who stamps the invitation after verifying the person, the photo ID and the name on the ticket all match. The stamp voids the ticket, so it can’t be re-used to vote a second time.

The invitation ticket can be obtained at a Post Office, a Police Station, a Court House, or the like. When applying for the invitation, the person needs to present a photo ID and provide their social security number. This information is uploaded to a central database, which establishes that the person qualifies and has not already received an invitation. The invitation is printed and the person signs for it. This will require a box, similar to a credit card processor, with a keypad and a printer and an Internet connection. For extra security a scanner can be included to scan the photo ID. If the person does not qualify to vote, a message to that effect is printed, with the reason why.

As you can see, this is quite an elaborate system. It will be pretty costly. But think of this: If we are to take voting seriously, then it is only right to take voting fraud prevention seriously as well.

Quote of the Week

The greatest threat to the constitutional right to vote,  is voter fraud. Lynne Westmoreland