﻿The First Amendment is Under Assault 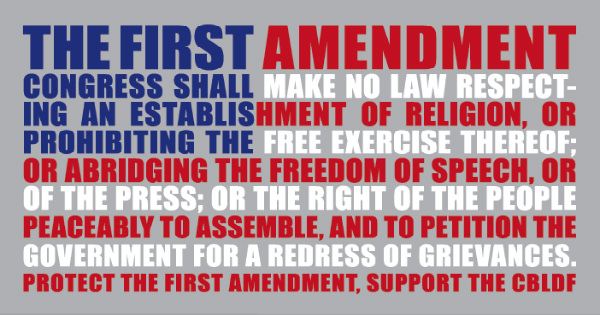 At least 17 states are not only passing bills to stop destructive protests, but also peaceful gatherings. This is in direct opposition to the First Amendment which states “Congress shall make no law respecting an establishment of religion, or prohibiting the free exercise thereof; or abridging the freedom of speech, or of the press; or the right of the people peaceably to assemble, and to petition the Government for a redress of grievances.”

The Supreme Court has interpreted “speech” and “press” broadly as covering not only talking, writing, and printing, but also broadcasting, using the Internet, and other forms of expression. The freedom of speech also applies to symbolic expressions, such as displaying flags, burning flags, wearing armbands, burning crosses, and the like.

The Supreme Court has held that restriction on speech because of its content—that is, when the government targets the speaker’s message—generally violate the First Amendment. Laws that prohibit people from criticizing a war, opposing abortion, or advocating high taxes are examples of unconstitutional content-based restrictions. Such laws are thought to be especially problematic because they distort public debate and contradict a basic principle of self-governance: that the government cannot be trusted to decide what ideas or information “the people” should be allowed to hear.

As citizens unhappy about the Trump administration look to build on the momentum of the historic Women’s March with additional public expressions of outrage, Republicans across the country are quietly introducing legislation aimed at limiting and even criminalizing peaceful demonstrations.

According to a recent count from the American Civil Liberties Union, at least 17 states have proposed such anti-protest bills, many of which include language ostensibly aimed at improving measures such as public safety. But upon closer analysis, these bills all appear to share the intended goal of suppressing First Amendment rights by making peaceful dissent a crime with the threat of jail time and hefty fines.

While the non-Trump supporters are using their freedom of expression and to express their grievances to their Representatives and Senators, states are trying to stop the “bloodied” Congress with this new onslaught of illegal laws. The legislative move to suppress protests comes amid angry town halls that have erupted across the country, where thousands of constituents have railed against Republican lawmakers for their reluctance to speak out against the Trump administration, their ill-conceived plans to dismantle Obamacare, and more.

Add these quietly passed illegal laws along with the outward bursts of Donald Trump, one would need to worry, are we in 2017 America or the Nazi Germany of Adolf Hitler?